skip to main | skip to sidebar

Well, my crafting/creating mojo has left me for a little while.  I think that's what's been contributing to my finishitis.

Finishitis (n)
A common ailment afflicting many creative-types resulting in many partially completed projects with nary a DONE in sight. Not to be confused with its cousins Finishitupitis and Startitis
Finishitupitis (n)
A strange compulsion to finish partially completed projects. This is quite a rare ailment in the crafting world. If you ever catch this, enjoy it as long as you can
Startitis (n)
This ailment drives a person to start new projects as fast as they can, often without finishing their current project. It often leads to cases of Finishitis

In the wake of this persistent strain of Finishitis, I've decided that March is for creating without obligations. I'm going to go where ever the muse takes me, not worry about those pesky UFOs screaming for attention or if anything started actually gets finished.  I'm just going to see where the muse takes me.

So far, I'm a little surprised where it's taken me...

First it lead me to <gasp> my February UFO Challenge project where I did the sewing for the vines and the applique. 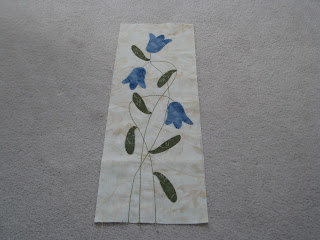 Now it's lead me to this cross-stitch kit that I've had sitting the cupboard for quite some time.  To me the image already looks obvious, unlike the Nun and the Penguin.  Though, since I know what it's going to end up looking like I'm a little biased.  What does it look like to you? 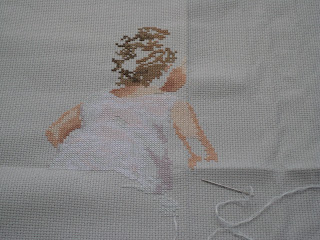 Anyone care to join me in this March Madness?
Posted by CJ at 6:17 AM

I love your definitions! I started something unrelated to quilting a couple of days ago. You won't even be able to tell what it is from a photo for a couple of days so I'll wait to post one when I'm done. This project will be easy and has a deadline so will get finished (finishitupitis). I love that word!!!

I like the progress on your blue flowers. I came so close to starting something new today - I was good however :0)

Both of these are lovely projects - beautiful work.

I told my doctor something was wrong with me several months ago. He said it was all in my head. I'm sure it was "startitus" back then, but it definitely has progressed into full blown "finishitis"!!!! I started blogging hoping to motivate myself into finishing things, but I've only made it worse!

This huge difference was between men and women and these hormones are primarily responsible for that so keep that in mind one cause you to be a woman the other causes you have male love King Size Male Enhancement characteristics and now let's go back to the sly cut I want to show you something that 's really fascinating here's Esther dial again here’s testosterone lookout don't they look almost the same don’t they look almost identical that almost.

They're needed in very little is absorbed in chemically ohm no I would not really consider com even out sometime the side effects you can he that com they get Pure Testo Xplode warning about phone been I problems within Pure Testo Xplode healthcare it it's really not something that ohm we see because the dairy minimal level that are absorbed systemically I wouldn't be overly concerned about the effect on Bowl are if you need be in health caret’s for something like at up okay thank you an.

thanks for your article,

One Project a Month - Finishes

CJ
I'm a collector of fabric who occasionally quilts. I enjoy being distracted by all sorts of crafty endevors.